The recent report that RHP Darren Holmes has now been connected to the Albany County District steroid investigation has prompted a well known superstar to speak up and lash out at his accusing critics.

"You see, only crappy players use steroids. Us superstars don’t need them – so leave us alone and let us do our thing".

Holmes has been connected with Gary Matthews, David Bell, John Rocker and Jerry Hairston Jr. in the latest investigation.

Some of the other players with positive MLB tests to date include Alex Sanchez, Jorge Piedra, Mike Morse, Matt Lawton, Ryan Franklin and Guillermo Mota. All pretty crappy.

In fact, other than Rafael Palmeiro who served as a public sacrifice to negative media attention, no bonafide MLB player has been caught knowingly using steroids.

So despite all the speculation, and considering the careers of those who have been caught, it doesn’t really seem like steroids would have helped players such as Mark McGwire, Barry Bonds, Roger Clemens, Brett Boone, Ivan Rodriguez, Sammy Sosa, Miguel Tejada or Gary Sheffield. These players just aren’t crappy enough to benefit from using steroids. 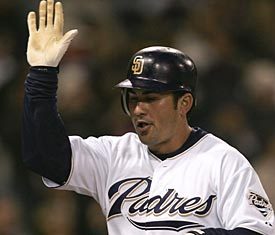 The San Diego Padres, frustrated with the pace of negotiations, renewed the contract of 1B Adrian Gonzalez for $500.00 above the league salary minimum.

Gonzalez claims this raise will not change his life or his approach to the game.

Gonzalez hopes to invest some of his new money in penny stocks and wants to pay off his parents’ Second Life mortgage.

In an unrelated story, Greg Maddux kept his house extra warm this winter by burning $1000.00 bills.

In the spirit of John Gibbons !!!!